Well done lads you stuck at it to get a great win, you ignored the cheating which just helped to get the crowd behind us and create one of the best atmospheres for a long time
Top

I heard their fans whinging as they headed to their coach - but both sendings off were good decisions, first one last man after a clear foul, and the second one was dangerous play and deserved the second yellow, studs showing and caught the man, don’t care that he got the ball!!

If I was a Nuneaton fan I’d be more worried about my time wasting cheater of a keeper who seems more interested in baiting the crowd and letting us know how much money he was earning - love it when an arrogant pri..... let’s be charitable, and say prat like that falls on his face!!

Still too early to say if we’re the real deal, but on the entertainment stakes the last two home games have been awesome!! 3 out of 3 - I miss next Saturday but I expect that to be a real challenge!! Tonight though, we are top of the league!!
RIP Dale Roberts - gone, but never forgotten !!
AFC Rushden & Diamonds Membership No. 51
Top

Well you spend most of the second half listening to fans demanding changes, start pressing, make a substitution and they have only got 10 men and then with perfect timing the manager makes his changes. Its 2-0 game over and job done.
Thats why Mr Peaks is the manager.
Nuneaton looked a good side until that first sending off and maybe the lads hard work made us some luck and eventually the goals came.
We looked a little short going forward at times but the table doesn’t lie.
Top

I also meant to say how great it was to see Ben Farrell get some game time today!!

I got to talk to few Boro fans today and they were reasonable folk and accepted the reds as inevitable. It's a shame for them that the players were not better disciplined, they contributed to their own downfall with silly fouls and getting on the wrong side of the ref. Up to a point they would have been worthy sharing the spoils, until the last 15 mins they had had the best chances to score. Fortunately for us they were not set a good example by their manager, / chairman.
Just how long this ride is going to last is anybodies guess, let's enjoy it whilst we can. Next up its the Diamonds Old Boys.
Top 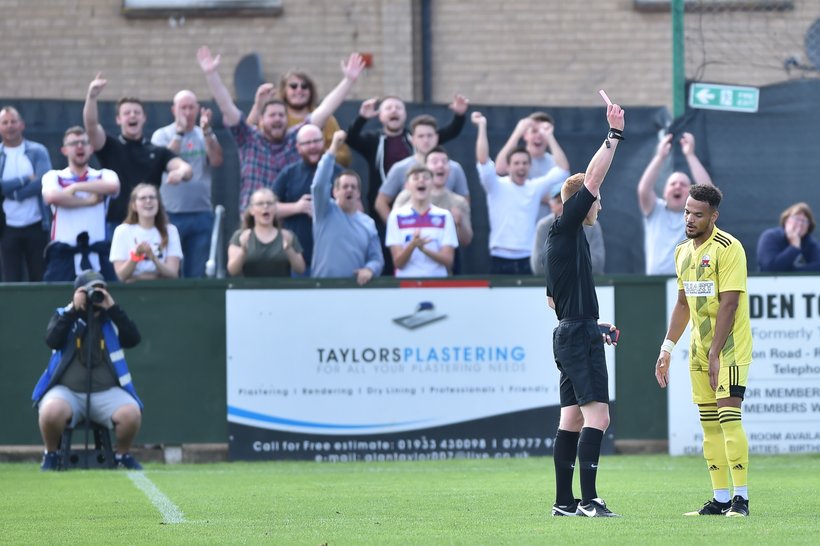 Lol you can spend all the money you like but if you lack discipline you might aswell just bung in a youth player and risk it. With the experienced players Nuneaton have, lacking discipline and throwing the game away like that is totally unacceptable.

Onto us, we played well, kept the ball well, didnt get too wound up when they tried to provoke us, then when the opportunity came to tweak it and go for it we took it.

I don't think you could ask for a better start than we bave had to the season, I certainly didnt expect to beat Nuneaton so if we have a blip later on - those unexpected 3 points could prove valuable.

Well done to the players, manager and coaching staff. We seem to be more focused and composed so far this season.
Top

A thoroughly enjoyable day and great entertainment all round once again. The lads continue to remain focused on the task in hand and are playing an attacking brand of football without compromising their defensive play.

5 stars again including the new local real ale from Digfield Ales who are based in Barnwell which, I understand, the Club hope to continue to provide in Dale’s Bar.
AFC Rushden & Diamonds - Member No: 375
Top
Post Reply
28 posts